Film / The Sons of Katie Elder 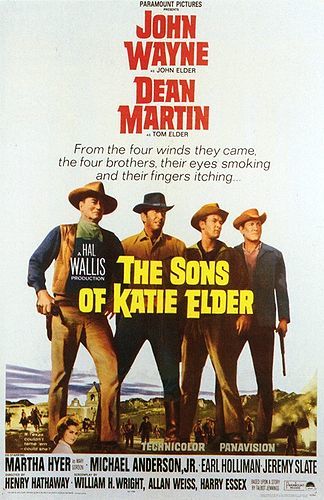 This is a family reunion you don't want to be on the wrong side of.
Advertisement:

The Sons of Katie Elder is a 1965 Western directed by Henry Hathaway, starring John Wayne and Dean Martin.

The plot concerns the eponymous four sons of Katie Elder, who return to their hometown of Clearwater, Texas, after their mother dies. None of them are particularly successful; John (Wayne) is a Gunslinger, Tom (Martin) is a gambler, Matt (Earl Holliman) is a failed hardware store owner, and Bud (Michael Anderson, Jr.) is a hot-headed 17-year-old who has refused to go to college. Despite this, they vow to take care of Katie’s last few affairs and move on with their lives.

However, they discover that during their absence, their father died under suspicious circumstances and their mother was forced off the family ranch into a small homestead to live in poverty. Figuring that something is afoot, they begin to look into the affairs of Morgan Hastings (James Gregory), the rich gunsmith who now has the land. However, their questions end up stirring up trouble within the community, and it isn’t long before lead is flying.

The film was Very Loosely Based on a True Story, specifically an incident that occurred in Graham, Texas, and Marlow, Oklahoma, that involved the Marlow brothers fighting a personal battle against a mob (though there were five brothers, not four). Some of the events that happened there are present in the film, like a mob gathering in front of a jail and an ambushed prison convoy on a river. More information about that incident

can be read on That Other Wiki.

The Sons of Katie Elder contains examples of: