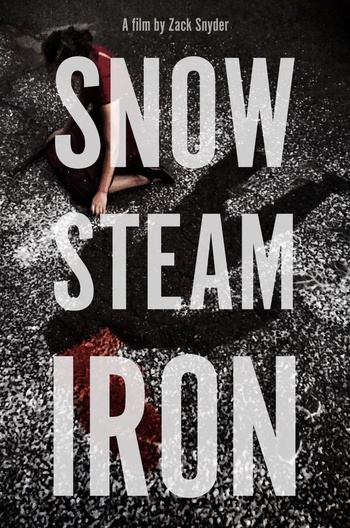 Snow gently falls on the blood-stained streets of a seedy out-of-time New York City. Steam envelopes the nightmare unfolding within its narrow alleys. Iron is the will of the one who would dare to resist... fight... survive.
Advertisement:

Snow Steam Iron is a 4-minutes Short Film written and directed by Zack Snyder. It was shot using an iPhone and first released in September 2017 on Vero, the social media Snyder is a prominent user of.

The action focuses on Lin Woo (Samantha Win), a model who fights back after her latest assignment sends her to a photographer who enjoys hurting women. When a bunch of gangsters and corrupt cops are brought in to keep her quiet, Lin Woo turns the tables once again, despite the odds being against her.