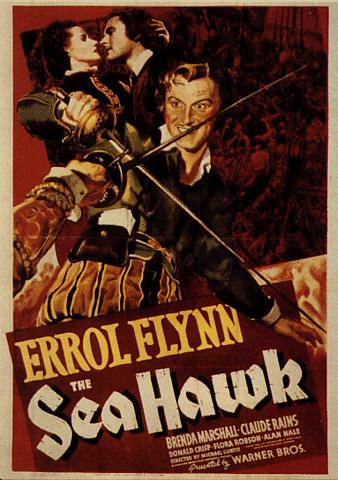 By now you know the purpose of the Sea Hawks... in our own way, to serve England and the Queen.
Advertisement:

The Sea Hawk is a 1940 Warner Bros. Swashbuckler of piracy in the age of Elizabeth I, directed by Michael Curtiz, and starring Errol Flynn, Brenda Marshall, and Flora Robson; notable minor roles were sustained by Donald Crisp, Alan Hale, Sr., Henry Daniell, and Claude Rains. Though the film took its name from the 1915 novel by Rafael Sabatini, it featured an almost entirely original screenplay by Howard Koch and Seton I. Miller, based loosely on the life of Sir Francis Drake and the story of the Spanish Armada. (It shows some influence from the 1937 Armada film Fire Over England, which also starred Flora Robson, as well as a young Laurence Olivier and Vivien Leigh.)

Sabatini's picaresque novel had already been filmed as a silent in 1924, a version that hewed much more closely to the book. The 1940 film was deliberately designed not only as an adventure film, but also as a call to rally to the defense of Britain, then threatened by the Nazi juggernaut. The film was originally intended to end with a shot of England's modern-day battle-fleet; as it is, it ends with a speech by Robson denouncing "ambition of one man" who threatens peace for all — the parallel between Philip of Spain and Adolf of Germany being all too obvious. It was, indeed, this timely message, delivered before America had entered the war, that caused this film to be ranked, along with Lady Hamilton, as one of Winston Churchill's favorite films.

Errol Flynn plays a much more controlled, subdued character as Captain Geoffrey Thorpe than in his previous swashbucklers; Thorpe is a man driven solely by his patriotic duty. Olivia de Havilland having rejected the part of Doña Maria for fear of type-casting (she was, moreover, at odds with the Warners' management over her insistence on playing the part of Melanie in Gone with the Wind), was replaced by Brenda Marshall, who made a lusciously raven-haired, sloe-eyed, aristocratic Spanish lady. Similarly fearing to play to type, Basil Rathbone rejected the part of the scheming Lord Wolfingham, and was replaced by the icily evil-sounding Henry Daniell. Montague Love took the part of King Philip II, and Claude Rains played Maria's Satanic-appearing but ultimately rather sympathetic uncle.

The eminent Austrian composer, Erich Wolfgang Korngold, who had been driven from his home by the Nazi Anschluss, having already produced outstanding scores for two previous Flynn swashbucklers, Captain Blood and The Adventures of Robin Hood, undertook to score The Sea Hawk as well. The resulting score was a lush Late Nineteenth Century evocation of the spirit of the sea, of adventure, and of romance, characterized by Wagnerian themes and Leitmotifs, and seasoned with hints of Spanish rhythms and Elizabethan lute-songs (Maria sings the original song, "Stood a Maiden at Her Window," accompanying herself on a lute). The music garnered Korngold an Academy Award nomination for Best Music Score (losing to Alfred Newman's Tin Pan Alley) and has been considered a classic of film music ever since.

Other notable talents engaged for the film included fencing master Fred Cavens to choreograph the duels. Unfortunately, Henry Daniell, though an outstanding actor, was absolutely hopeless as a fencer — so, for the climactic Duel to the Death between Thorpe and Wolfingham, Cavens had Errol Flynn progressively snuff out with his rapier the candles lighting the scene, conveniently hiding the fact that Cavens himself was standing in for Daniel except in close up shots.