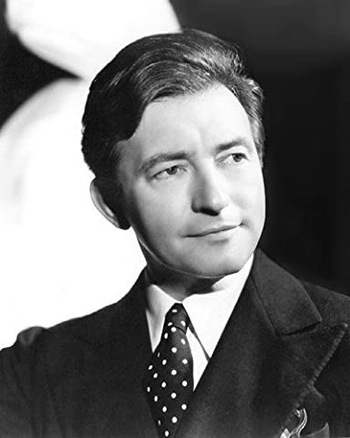 "I am shocked — shocked — to find that gambling is going on in here!"
— Louis Renault (Claude Rains), Casablanca note A much-loved piece of Hypocritical Humour.
Advertisement:

William Claude Rains (10 November 1889 – 30 May 1967) was an English actor of stage and screen, and one of the most significant actors in the The Golden Age of Hollywood.

Born in the Camberwell section of London, he overcame the handicaps of a Cockney accent and a lisp to become a notable stage actor under the tutelage of the famous actor-manager, Sir Herbert Beerbohm Tree, who helped him to pay for elocution lessons. That beautiful voice and flawless diction he had acquired landed him his breakout role as the title character of the 1933 film of The Invisible Man — a film in which his face does not appear until the closing scene. This part is referenced in a line from the opening number of The Rocky Horror Picture Show, and in Heroes, where another invisible man is named for him.

A series of more or less macabre parts followed, such as the murderer John Jasper in the first sound film adaptation of Charles Dickens' The Mystery of Edwin Drood. Rains's cool, sardonic delivery made him a natural for costume villainy, and he appeared as the treacherous Earl of Hereford in the Warner Brothers’ adaptation of Mark Twain’s The Prince and the Pauper, in which rising Warners star Errol Flynn also appeared as Sir Miles Hendon. Rains and Flynn would appear together again to even better effect in The Adventures of Robin Hood; Rains would credit Hood director Michael Curtiz with teaching him to moderate his theatrical acting style for films.

Later the same year Rains would play the musician Adam Lemp, father of the eponymous Four Daughters ― ironically, this now largely forgotten film was one of his most popular, and spawned two sequels and an almost exact copy-cat variant. As Senator Paine, the corrupt “Silver Knight” in Frank Capra’s Mr. Smith Goes to Washington, Rains was nominated for his first Best Supporting Actor Oscar. Three years later he would earn a second nomination for the part of raffish collaborateur Louis Renault in Curtiz’s Casablanca; his delivery of the Epstein brothers’ sparkling dialogue immortalized such lines as “Round up the usual suspects.” He also gets a shocking — shocking! — scene of Hypocritical Humour, and the film famously ends with his and Humphrey Bogart's beautiful friendship. 1944 brought him his third Oscar nomination, as the long-suffering husband of Bette Davis’s shrewish society matron in Mr. Skeffington.

In 1945, Rains was featured in the most expensive British film that had been made up to that time, playing opposite Vivien Leigh in George Bernard Shaw’s Caesar and Cleopatra under the supervision of Shaw himself; the film was, alas! a notorious bomb. The next year, a better form of Notorious under the direction of Alfred Hitchcock brought Rains his fourth and last Oscar nomination for the difficult part of a sympathetic post-war Nazi conspirator. In 1951, he made a successful return to the stage, starring on Broadway in writer-director Sidney Kingsley's adaptation of Arthur Koestler's novel Darkness at Noon. The role of Rubashov, an Old Bolshevik imprisoned by the dictatorship he helped to create, won Rains the Tony Award for Best Leading Actor in a Play.

In 1957 Rains sang and danced to the music of Edvard Grieg (!) in a So Bad, It's Good TV musical adaptation of Robert Browning’s poem, The Pied Piper of Hamelin. He made several appearances on television anthology series in that and the following decade, notably on Alfred Hitchcock Presents. Rains’s last film appearance was as King Herod in George Stevens’ 1965 Biblical epic, The Greatest Story Ever Told.

Rains was married six times and had one child (his daughter Jennifer, who worked as an actress under the name Jessica Rains in the '70s and '80s). In the 1940s and '50s he owned a 380-acre farm in eastern Pennsylvania, which he lived on and farmed when he wasn't busy acting. A chronic drinker, Rains developed cirrhosis of the liver and died of abdominal bleeding at the age of 77.

Some of his notable film roles include: