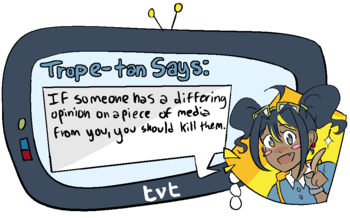 "They wanted to play 'memes' with the old school.
Now there are tears."
— Fast Eddie
Advertisement:

That's What She Said.

Want further proof that TV Tropes Will Ruin Your Life? Just take a look at all of the egregious memes that we've spawned. Don't worry... you'll eventually start using these in time.

Since these are in-jokes, you'd be hardpressed to find them outside of TV Tropes, but within, they are memetic.

Naturally, many of these are Repeatedly Used On This Very Wiki. (Including that one.)

Remember that trope names are often built off of existing references or memes, or are chosen to match what people would "naturally" call something, so it can sometimes be difficult to untangle whether a memetic trope name originated on TV Tropes or was merely spread by it.

(If you are unfamiliar with some of these, you probably don't visit our forums.)

Statler: Say, why is it that we always have to show up at the end of these articles?
Waldorf: Simple! They wouldn't shut up otherwise!
Both: Do-Ho-Ho-Ho-Hoh!