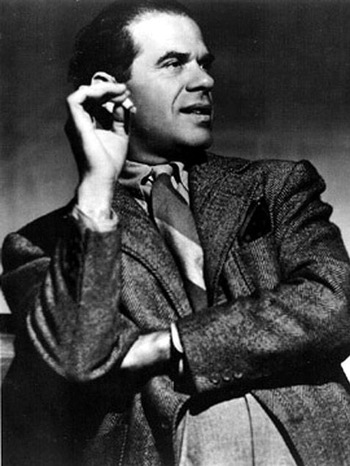 "Someone should keep reminding Mr. Average Man that he was born free, divine, strong; uncrushable by fate, society, or hell itself; and that he is a child of God, equal heir to all the bounties of God; and that goodness is riches, kindness is power, and freedom is glory. Above all, every man is born with an inner capacity to take him as far as his imagination can dream or envision-providing he is free to dream and envision."
—Frank Capra, The Name Above the Title
Advertisement:

Frank Russell Capra (born Francesco Rosario Capra; May 18, 1897 – September 3, 1991) was an Italian-American film director, producer and screenwriter who became the creative force behind some of the major award-winning films of The Golden Age of Hollywood in the 1930s and '40s.

He was born in Sicily; his family emigrated to the U.S. when he was five. He originally went to Caltech (when it was still known as "Throop College of Technology") for a degree in chemical engineering; the "Capra Ranch" he donated to the university is still used for academic and student retreats. He then got a job making a small film for a couple of guys because he needed the money. That was during a recession in the early 1920s and he had trouble finding work. From this, Capra did more film work, his engineering degree long forgotten. Like many pioneer film-makers of the Golden Age, Capra entered cinema at a time when the nascent medium was not yet considered a serious vocation, yet after a steady apprenticeship, quickly became a master and he made some of the greatest films in cinema history.

His first major Hollywood experience was with Hal Roach in the mid 20s writing scripts for Our Gang, and films for Harry Langdon a popular silent comedian of that era though overshadowed by Keaton, Chaplin and Lloyd. From 1928 to 1939 he worked under Columbia Pictures making some of their most successful pictures. This was the era where Capra became famous as "the populist" of the Depression, tackling on a variety of topics and subjects that captured the mood of the public. They were known as "Capraesque" by admirers and fans and "Capra Corn" by critics. They usually featured stories about a "little guy" against a system, a classic trope in American cinema that was largely codified by Capra. Capra also became one of the few film-makers of this era to be known to the public as a director, since he succeeded in putting, as his autobiography notes, "his name above the title". A less savoury aspect of this behaviour was Capra's tendency to hijack credit for the story ideas of his movies from his screenwriting collaborators, namely Robert Riskin.

As his biographer Joseph McBride notes, Capra had a reputation for being a liberal film-maker on account of the populist subjects of his '30s films such as Mr. Smith Goes to Washington, Meet John Doe and others. In actual fact, Capra's politics were conservative if not reactionary: he strongly opposed the New Deal and in the mid-'30s was an admirer of Mussolini (much like his Columbia boss, Harry Cohn). During the era of the Red Scare, Capra became a FBI informant and testified against many of his collaborators to HUAC who became blacklisted as a result of his actions. Capra did this largely out of self-preservation, since the Committee suspected him of Communist sympathies on account of the "leftist" subjects of his '30s films, most of which were chosen by Capra because it was popular with the public rather than any ideological loyalty one way or another. As a director, Capra was more interested in technique and emotion than any real ideological message. Despite his political beliefs, he was active in the Unions In Hollywood and a founding member of the Director's Guild.

When World War II broke out, Capra was under no obligation to serve; he was over draft age and had, in fact, been a US Army officer in the prequel. Nevertheless, he reenlisted, and as Major Capra, produced the Why We Fight set of seven propaganda films for the War Department, to explain what the war meant. (Using the term 'propaganda' in its classic sense, as in public relations material created by and for a government; what he says in the films about the Nazis and the Nationalist Japanese, that they want to take over the world and make everyone else into slaves, is correct. Much of the material was in fact translations of their own propaganda pieces.) The first of the series, Prelude to War, won the 1942 Academy Award for Best Documentary Feature, Capra's sixth (and final) Oscar.

In the mid-1940s, Capra attempted to establish himself as an independent filmmaker by forming his own film company, Liberty Films, in partnership with fellow directors William Wyler and George Stevens. The only two films produced by Liberty Films were It's a Wonderful Life and State of the Union, neither of which was a success (at the time). In the '30s, Capra made 16 feature films; after the war he made 6 films in 15 years, two of which (Riding High and Pocketful of Miracles) were remakes of his own films from the '30s, and none of which — with the exception of It's a Wonderful Life — are regarded among his best films. Some of the prominent work as a director in this time was a series of educational documentaries he made for the Bell Laboratory Science Series.

Capra for his part blamed the Fall of the Studio System, citing the failure of Liberty Films, sold in 1947 to Paramount, as an instance of "the more or less continuous downward slide of Hollywood's artistic and economic fortunes" (from his memoirs). Other critics, such as William S. Pechter and Joseph McBride argue against this, pointing out that a number of directors in The '30s (such as Alfred Hitchcock, John Ford, Howard Hawks) actually continued working and making great films in the same period of what Capra declares Hollywood's downward slide, and as such Capra's downturn is more properly a result of his inability to keep pace with the changes of the audience. Something they note that James Stewart, the actor most often associated with Capra, also did well (considering his many great turns in Westerns and thrillers in The '50s). Many note that a great deal of Capra's success was rooted in the climate of the Depression (i.e. his class-conscious screwball comedies, his stories of little-guys against the system) and he was not quite adept at dealing with the more psychologically nuanced and complex world of post-war America.

Despite this, Capra's films found life on television and he became a favorite on many American directors, figures as diverse as John Cassavetes, Robert Altman and especially, Steven Spielberg.

Films he directed with pages on TV Tropes include: