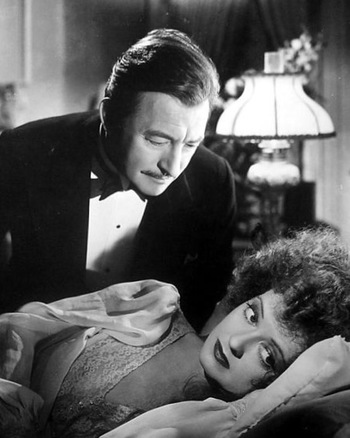 "A woman is beautiful when she's loved, and only then."
Advertisement:

Mr. Skeffington is a 1944 drama film based on Elizabeth von Arnim's novel of the same name, directed by Vincent Sherman and starring Bette Davis and Claude Rains, both of whom received Academy Award nominations for their roles.

The story begins in 1914. Beautiful Fanny Trellis (Davis) has many admirers, but she also has an extravagant, dishonest brother, Trippy (Richard Waring), who embezzles funds from his boss, Job Skeffington (Rains). Job attempts to confront Trippy, but is instantly smitten by Fanny. In order to save Trippy's skin and facilitate a comfortable life for herself, Fanny marries Job. Job is initially devoted, but Fanny is shallow and faithless. The film follows their marriage as the years pass...