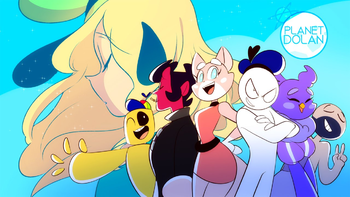 From questions about outer space, to how to edit a wiki page, they answer some of your most burning questions about life.note From left to right: Pringle the One, Hellbent, Shima Luan, Dolan, Melissa Morgan, and Zaragamba. In the background: Golden Gooby.
Advertisement:

Daniel James Johnson, a.k.a. Danger Dolan, is an Australian YouTuber who specializes in trivia countdown videos narrated by animated characters. Beginning in 2014 with an avatar that was essentially a mix of Dolan Duck and a scowling rage face, Dolan's countdown videos became increasingly popular to the point where Johnson started a production company (Danger Dolan Pty Ltd

) and hired several other voiceover artists to narrate the videos. By late 2015, with the other narrators taking on the bulk of the work on the main channel so Johnson could focus on animation and comedy, the channel was renamed Planet Dolan, and Dolan's character evolved into a white humanoid being somewhat reminiscent of the Pillsbury Doughboy, but still wearing the original Donald Duck hat (or an off-model version thereof).

, focuses on countdown lists, with a tendency to favor real-life absurdity. There's a gaming channel

and a (dormant) movie channel

, and then there's Super Planet Dolan

, a more family-friendly animation channel which features Q&As with Dolan and his most frequent collaborator Shima Luan, as well as comedy music videos.