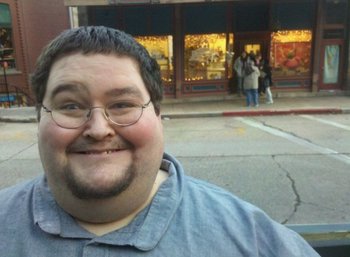 "What's up ladies and gentlemen? Boogie2988 comin' at ya LIVE through the power of the internet!"
Advertisement:

Imagine growing up with your father as a heavy drinker and smoker who worked a dead-end job at a coal mine, and your mother as abusive towards you on a regular basis to the point that you are officially diagnosed with PTSD. Imagine being a target for frequent bullying.

Does that sound like the backstory of a successful YouTuber to you?

Well, that happens to be the story of Stephen Williams (b. 1974), better known as boogie2988, who is a YouTube vlogger, comedian, armchair philosopher, and gamer who goes by the nickname "Boogie".

His most noticeable feature from first glance is his weight (526 lbs as of 2012), which has been Played for Laughs on a number of occasions (especially earlier in his career), but is also a very serious topic for him. The health issues induced by his weight have made Boogie diagnosed with anxiety and depression, and he is open about how he hates his body but at the same time is unashamed of it.

He's known for "Rambling" videos and videos where he gives his 2 cents on certain relevant topics in gaming/YouTube news, but is by far most famous due to his character Francis, an easily agitated hardcore gamer with a comical lisp who is often recorded by his sister (played by Boogie's wife Dez), who makes him rage for one reason or another. One of Francis' rage videos was featured on =3, which was Boogie's first claim to fame and set him on the road to success. In December of 2017, Boogie stated he was getting divorced with his wife. Not long thereafter he underwent life-saving weight-loss surgery and began blogging about his weight-loss surgery and the triumphs and tribulations from it. As of Fall 2019, Boogie had lost over 200 pounds.

"Guys, I love you very much. And I'll see you again soon!"