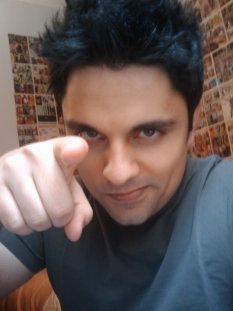 You be trollin'!
Advertisement:

You know what time it is forum, it's time for the Comment Question of the day, and it comes from a user named "ThisTroper". And he says, "Could you describe Equals Three here?" Leave your interesting or creative responses in the comments section below.

(=3) was a YouTube series formerly hosted by Ray William Johnson, reviewing viral videos found by or sent to him. Three videos were shown and a question submitted via video was posed for the commenters to respond to in the comments section (which was discontinued in 2013), with a schedule of new videos being posted every Tuesday and Friday.

, Ray retired from the show but promised to find a new host within two months who'd then reboot the series. On July 16, 2014

, the show was finally rebooted with Robby Motz, who hosted for a year until he announced his departure on July 24th, 2015

by Kaja Martin four days after he left, who only had a 30-episode run before she left on November 24, 2015

. She was then replaced by Carlos Santos on December 4, 2015

, who served as the final host.

Ray used to be in a music group called Fatty Spins, which has its own page. Ray also released songs and videos under the account name "Your Favorite Martian"

, which has a page here. Years later, he came up with a new animated band project called The Upside Downs which he primary uploads on TikTok.

The series also had a Spin-Off in Spanish: Igual a tres

, hosted by Pedro Flores; as well as a French equivalent in What the Cut, whose host and founder, Antoine Daniel, admitted that =3 was a direct inspiration for his series.

Not to be confused with :3.

"I'm Ray William Johnson, and I approve this trope!"
"So tell me, forum...what's Victoria's Secret?"