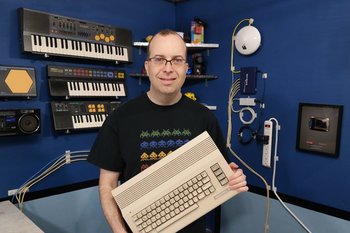 "Hello, and welcome to the 8-Bit Guy!"
Advertisement:

David Murray is The 8-Bit Guy

(formerly The iBook Guy), a YouTube personality who focuses on retro computers and other forms of technology coming from the seventies onward (he first focused on classic Apple products before broadening his focus).

His videos show repairs, restorations, and demonstrations of well-known vintage computers such as the Apple ][, the Commodore VIC-20, the Commodore 64, the Tandy Color Computer, and the ZX Spectrum, as well as more obscure vintage computers. He also produces long-form documentaries that delve into the history of notable computer systems.

David occasionally reviews homebrew games made for vintage systems, and he himself has also made his own homebrew games and software, notably Planet X2

for MS-DOS compatibles; both are sci-fi Real-Time Strategy games where the player controls an army of human colonizers on a uninhabited Earth-like alien planet and must defeat a hostile race of alien colonizers, known as the Protoids, who seek to claim the planet as their own.note There is a Planet X1 for the VIC-20; while the game is free to download from his website and in a playable state, it is unfinished. Also, the game requires 32KB of RAM to run, requiring either a VIC-20 emulator or a RAM expansion cartridge if using real hardware. His most recent game is Attack of the PETSCII Robots

for several 6502-based systems, such as the Commodore 8-bit family of computers (PET, VIC-20, and C64), the Apple II series, and Atari 8-Bit Computers; it is an sci-fi Action-Adventure game where the player must use their wits in order to survive against killer robots.note There are two versions for the C64; one is based on the PET version with single voice sound (to simulate the later model PET's beeper speaker) and the standard PETSCII character set (either monochrome or full color) and the other is an enhanced version with a more graphically detailed custom character set, sprite graphics for the player character and UI, and full SID soundtrack. The VIC-20 version requires a 35K RAM expansion and uses the C64 graphical version's custom character set. For the Apple II version, since the Apple II's character set cannot be redefined, the game uses bitmapped graphics with three tilesets for monochrome monitors, color monitors, and simulated PETSCII characters. The Apple IIGS version will take advantage of the IIGS' more advanced graphics and sound capability. Also in the works is a port for the Commander X16, and David has not ruled out a version of PETSCII Robots for MS-DOS, likely supporting the same graphics (CGA, CGA composite, Tandy, and VGA) and sound modes (PC speaker, Tandy 3-voice, and Ad-Lib/SoundBlaster) as Planet X3. Gameplay wise, all versions are identical. Also in development is the Commander X16

, a sister computer to the Commodore 8-bit machines; though David started the project and entitled it "his dream computer", eventually most of the aspects of development were taken over by other people, most notably fellow retro tech YouTuber Christian Simpson, aka "Perifractic

A related channel is 8-Bit Keys

, which demonstrates vintage musical keyboards, mainly amateur and toy keyboards by Casio and Yamaha, and other vintage sound production equipment. This page will show tropes from both channels.

The 8-Bit Guy contains examples of: