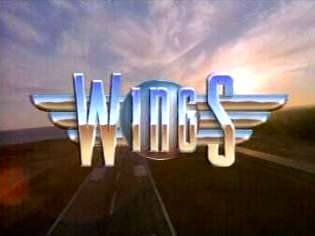 Wings is a Work Com that aired on NBC from 1990–97, created by Cheers producers (and future Frasier creators) David Angell, Peter Casey, and David Lee.

Other characters included Helen Chappel (Crystal Bernard), the proprietor of a nearby lunch counter, a lifelong friend of both Hackett brothers and eventually, Joe's wife; Lowell Mather (Thomas Haden Church), the lovably dumb airport mechanic; Fay Cochran (Rebecca Schull), a daffy retired flight attendant now working as Sandpiper Air's ticket clerk and flight announcer; and Roy Biggins (David Schramm), the greedy owner of rival carrier Aeromass. Later additions to the cast included sad-sack cab driver Antonio (after Tony Shalhoub scored in a small role as a waiter), who joined the cast in the third season and remained for the rest of the show's run; Alex Lambert (Farrah Forke), an ex-Army helicopter pilot who dated Brian for a while; Helen's neurotic sister Casey (Amy Yasbeck), who joined for the final three seasons after Forke left; and Budd Bronski (Brian Haley), brought in as a Suspiciously Similar Substitute for Lowell after Thomas Haden Church left at the end of the sixth season for a lead role on Ned & Stacey.

Not related to the 1927 Academy Award winning film Wings, Paul McCartney's '70s solo group, the final volume of the Nomes Trilogy, the Discovery Channel show about military airplanes which eventually spawned its own network (now known as the Military Channel,) or Winged Humanoid.