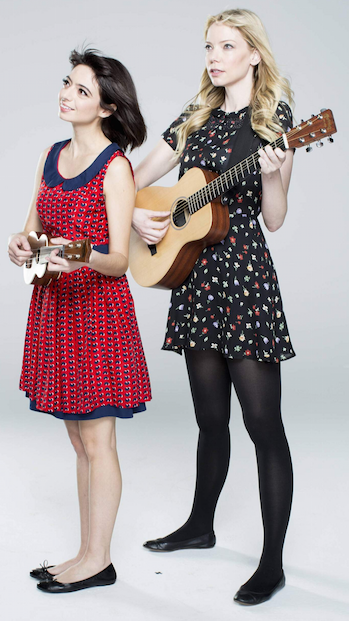 Garfunkel and Oates is a comedy pop duo consisting of Riki "Garfunkel" Lindhome and Kate "Oates" Micucci. The two began working together in 2007 after meeting at the Upright Theatre in Los Angeles, naming their band after "pop's most famous second bananas" (Art Garfunkel of Simon & Garfunkel and John Oates of Daryl Hall & John Oates).

Their music is usually defined by its fast pace and combination of sweet-sounding melodies and vocals with raunchy comedy. Song titles include "This Party Just Took a Turn for the Douche" and "Fuck You" (which featured on Scrubs bowdlerized as "Screw You"). They also comment on the current events of time, such as "Sex with Ducks" (a reply to Pat Robertson's comment that if same-sex marriage were permitted, why not bestiality) and "Why Isn't There More Fucking on This Island?" (a reference to Lost). They've even parodied one of their own songs with "I Would Never Dissect a Ewe" (as Simon & Hall!), a take-off of "I Would Never Have Sex with You."

They had their own comedy series on IFC that aired from late summer to fall 2014 for only eight episodes before being officially canceled in 2015. The series eventually became available on Netflix, though, and their special, Trying to Be Special, was released there in December 2016.

While the two women have separate careers, both have appeared in the same work periodicially. They both had comic roles on The Big Bang Theory, Kate playing Raj's cripplingly shy girlfriend Lucy, and Riki playing Sheldon's obsessive grad assistant Ramona Nowitzki. Both also appeared in DuckTales (2017), Kate voicing one of the main characters Webby Vanderquack, and Riki voicing May in the series finale.