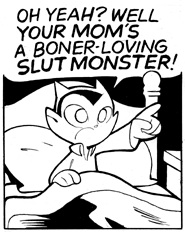 Oh, and she’s fat too.
Deb: Well, is anyone else here? I'm trying to earn money for college.
Kip: Your mom goes to college!
— Napoleon Dynamite
Advertisement:

In a war of Volleying Insults, insulting the opponent's mother is a useful snappy comeback. After all, Even Bad Men Love Their Mamas, and going directly after their mother is a surefire way to strike a nerve in one's opponent.

Of course, dialectical variants exist as well, from the ghetto-sounding "yo' mamma" to the Australian "ya mum", as used in the nation's prolific swearing. And as always, Wikipedia provides much more detail,

in its traditional deadpan way.

A "Your Mom" joke was found baked into a cuneiform tablet from 1,500 BC,

which means Your Mom really is Older Than Dirt (and also that she Really Gets Around).