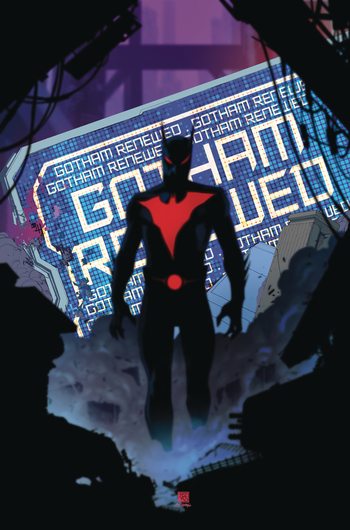 Terry McGinnis returns to the role of Batman in the DCU of the future in a new series, launched as part of DC Rebirth, as a follow-up to the previous series.

Batman Beyond follows Terry McGinnis, the Batman of Tomorrow, who had taken up the cowl as a teenager after fate had him cross paths with a retired Bruce Wayne. Eventually, Terry disappeared and Brother EYE caused a robot apocalypse, and a time-displaced Tim Drake became Terry's successor as Batman. Terry was eventually found to have been brainwashed by one of his villains and saved, with Tim vacating the role for his predecessor.

Now, after the world has recovered from the robot apocalypse, Terry returns to the cowl once more — now an adult. However, the world isn't as familiar as what he — and readers — once knew. While Batman Beyond took place in the DC Animated Universe continuity, this series applies Broad Strokes to the DCAU, Futures End (which the previous series was a sequel to) and the main DCU to craft a new world that has elements of all three. Some things are different, and some are the same, but the core idea remains — the world will always need a Batman.

For tropes concerning the Batman Beyond comics that acted as extensions of the animated series, see here.

This series came to an end after fifty issues, wrapping up its four-year run in December of 2020.

Batman Beyond provides examples of: