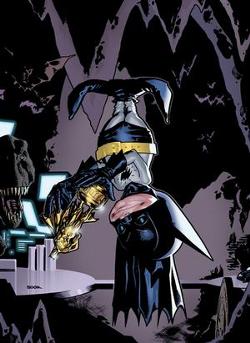 Bat-Mite is a Batman character created by Bill Finger and Sheldon Moldoff. He's Batman's #1 fan, who's actually an imp from the fifth dimension with magic powers. Technically he's a hero, but he often ends up causing more harm than good. Sometimes he gets into fights with Mr. Mxyzptlk, a Superman villain of the same species.

He vanished at the dawn of the more "realistic" Bronze Age, but his existence was eventually reestablished in the Modern Age in a Legends of the Dark Knight story. However, the state of his existence has been rather ambiguous since his return, with him both being described as a figment of a criminal's imagination and an imp from the fifth dimension.

He's taken the spotlight himself a few times after his return, including Knightfall parody oneshot Mitefall, a Bat-Mite miniseries, and the Elseworlds Superman and Batman: World's Funnest, a fight between him and Mxyzptlk across the DC Multiverse.