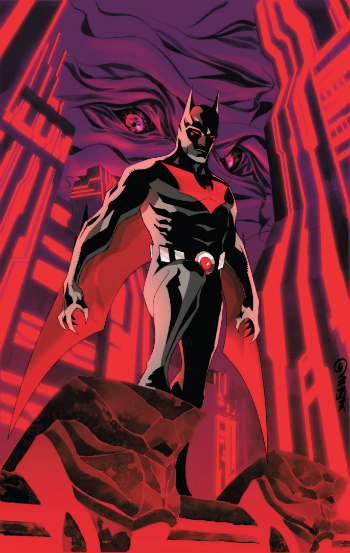 Batman Beyond is a cartoon television series which aired from 1999 to 2001 as part of the DC Animated Universe. Focused on Terry McGinnis, a high-schooler living 20 Minutes into the Future who discovered Bruce Wayne's identity as Batman, he took up the mantle and patrolled the city of New Gotham years after Bruce himself retired the cowl. There have so far been five different comic series based on the animated series: volumes one (1999) and two (1999-2001) are tie-ins to the animated series, while volumes three (2010-2011), four (2011), and five (2012-2013) are continuations. This page mainly deals with volume three onward.

Volume three is subtitled Hush Beyond, and is a six-part miniseries that was launched to gauge interest in a new ongoing comic. This led to volume four, following Terry as Batman in the years after the end of the animated series, and has him re-encounter and join the Justice League. Volume five was launched the following year as an ongoing digital-first series, and was compiled in print along with the concurrent spin-offs Justice League Beyond and Superman Beyond under the title Batman Beyond Unlimited.

Batman Beyond volumes three to five and their spin-offs, along with the Broad Strokes of the DCAU that preceded them, make up the Earth-12 universe in DC's multiverse.

For tropes pertaining to those series, please go to Batman Beyond (Rebirth).

Batman Beyond provides examples of: