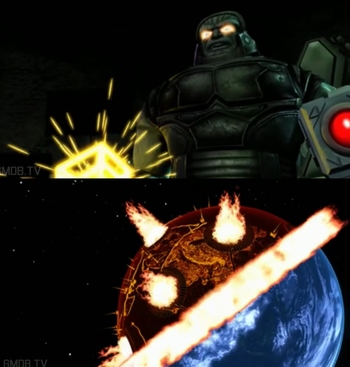 "I will transform this world into a new Apokolips. Not Hell on Earth. Something far, far worse"
"Do you know what happens now, Mr. Wayne? I'm not going to kill you...I'm going to set you free...Free to see the city you swore to defend tear itself apart. Free to see everyone you love hunted down and killed. Every scream, every death, vengeance for all that Batman has done."
—The Scarecrow, Batman: Arkham Knight
Advertisement:

Given the source material, it comes as no surprise that video games (and related comics) based on The DCU feature heinous villains.

Other Games (by release date)