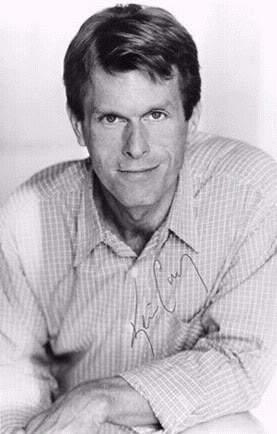 He was vengeance.
He was the night.
He will always be… BATMAN.
"My heart pulsed. I felt my face flush, my breath grew deeper, I began to speak, and a voice I didn't recognize came out. It was a throaty, husky, rumbling sound that shook my body. It seemed to roar from thirty years of frustration, confusion, denial, love, yearning... yearning for what? An anchor. A harbor. A sense of safety, a sense of identity. Yes, I can relate. Yes, this is terrain I know well. I felt Batman rising from deep within."
— Conroy on finding his Batman voice, DC Pride 2022
Advertisement:

Kevin Conroy (November 30, 1955 – November 10, 2022) was an American actor. Becoming a professional actor in the 1970s, Conroy performed in numerous productions over the years, particularly in theatre.

Then it came to pass that he became the goddamn Batman.

Beginning with Batman: The Animated Series, Conroy lent his voice to the iconic character and never looked back. His performances as Batman were often lauded, especially the manner in which he was able to vocally portray Batman and Bruce Wayne as two different people. In later years, he would say that the role of Batman resonated with him deeply as a gay man who had lived in the closet for most of his life, relating Bruce Wayne's struggle to maintain a facade of normalcy with his own struggles being gay in a time when it was not socially acceptable. He would continue to play the role of the Dark Knight every time he appeared in the DC Animated Universe, a continuity which includes the aforementioned Batman: The Animated Series, Superman: The Animated Series, Batman Beyond, Justice League, Static Shock, The Zeta Project, as well as numerous Batman-related games. Conroy reprised the role in Batman: Gotham Knight, Superman/Batman: Public Enemies, Superman/Batman: Apocalypse, the Batman: Arkham Series* with the exceptions of Batman: Arkham Origins and Batman: Arkham Origins Blackgate, which have Roger Craig Smith taking over the role in order to portray a younger, less experienced Batman, but including Suicide Squad: Kill the Justice League, which will be released after his death, Justice League: Doom, Justice League: The Flashpoint Paradox* Although for the majority of the movie, we see a different Batman who's voiced by Kevin McKidd instead, Injustice: Gods Among Us, DC Universe Online, Batman: Assault on Arkham, Batman: The Killing Joke, Justice League Action, Injustice 2, Teen Titans Go!* episode "Real Orangins", LEGO DC Super-Villains, Scooby-Doo and Guess Who?, MultiVersus, and Suicide Squad: Kill the Justice League. He wrote an autobiographical comic about taking on the role called "Finding Batman" published in DC Pride 2022.

It was announced in 2019 that after 27 years, he would play Bruce Wayne in live action, specifically in the Arrowverse's Crisis Crossover, Crisis on Infinite Earths, as a retired, parallel Earth version of Bruce drawing inspiration from Batman Beyond and Kingdom Come.

To date, he has portrayed Batman more than any other actor, voice or live-action, to have assumed the role. This is mirrored by Mark Hamill as The Joker, also in many of the above works.

Some of his other roles included Captain Sunshine on The Venture Bros.note Which was itself a parodic mashup of Batman, Superman, and Michael Jackson, John Grayson on The Batman, Bellicus on Ben 10: Alien Force, and various characters from both Max Payne and Jak and Daxter. His live-action roles include guest shots on two different episodes of Cheers, Captain Lloyd Hamilton on Ohara, and a recurring role as Captain Rusty Wallace on the first season of Tour of Duty.

He was not related to Frances Conroy. However, both of them were members of Juilliard's Drama Division Group 6 (1973–1977) and both have a history with DC Comics adaptations (Batman especially, with Frances playing in Catwoman, All-Star Superman, and Joker).

Unfortunately, Conroy passed away from intestinal cancer on November 10, 2022, less than three weeks before his 67th birthday. He is survived by his husband, Vaughn C. Williams, as well as two siblings. He will be greatly missed.

"I am vengeance, I am the tropes, I AM BATMAN!"