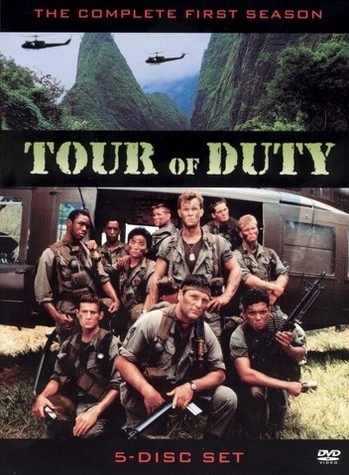 Tour of Duty was an American drama television series on CBS. It ran for three seasons from 1987 to 1990. It was inspired by the Academy Award winning feature film, Platoon, making stories about The Vietnam War acceptable mainstream entertainment.

The first season opens in 1967 and follows a standard light infantry platoon. In the second season, the troops found themselves relocated to a base near Saigon while conducting the typical "search and destroy" missions. Female characters were also introduced (in hopes of gaining more female viewership and because of the premiere of the ABC Vietnam Army Nurses drama China Beach which was aimed at a more female audience). In the third season, the remaining female character was killed off and the platoon was transferred to a SOG (Studies and Observation Group) unit under the command of Colonel Brewster (Carl Weathers), conducting covert operations in Vietnam and in Cambodia, culminating in the fictional version of the raid on Son Tay Prison. The third season was the show's last.

Tour of Duty contains examples of: