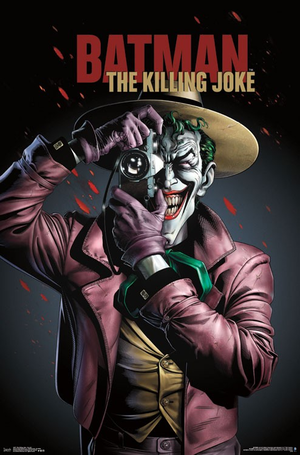 There were these two guys in a — wait, you've heard that one before, haven't you?

Batman: The Killing Joke is a 2016 animated movie in the DC Universe Animated Original Movies, based on the famous comic of the same name, written by Alan Moore and drawn by Brian Bolland.

The Joker believes that life is nothing but a sick joke and all it takes is one bad day to make someone as bad as himself—and to prove this, he has targeted Commissioner Gordon, while at the same time, Batman wonders if there will ever be an end to their feud. What follows is a twisted night as Batman wonders if the only way his feud with the Joker will end is with one killing the other.

receiving a one-time feature in theaters before being released to buy digitally on July 26, and on Blu-ray/DVD August 2, 2016.

The pictured example in animated form.

The pictured example in animated form.