Western Animation / Scooby-Doo! and the WWE: Curse of the Speed Demon 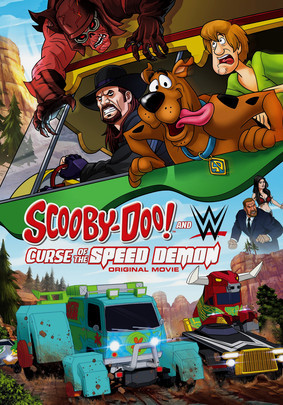 Scooby Doo and the WWE: Curse of the Speed Demon is the 25th entry to the Scooby-Doo Direct-to-Video Film Series once again co-produced with WWE Studios, and the second crossover with the WWE after Scooby-Doo! WrestleMania Mystery. Returning wrestlers include Vince McMahon, Triple H and The Miz.

Many of the wrestlers are competing in a race known as the MOTO X, where wrestlers in groups of two or three participate in a 3-part race for the grand prize of a $1 million...or that would be the case if a mysterious racer known as Inferno the Speed Demon wasn't trying to destroy the wrestlers for racing on "his" mountain. Asked by Vince McMahon to assist once more and aided by the legendary Phenom himself, Mystery Inc. is on the case.

Tropes seen in the film include: