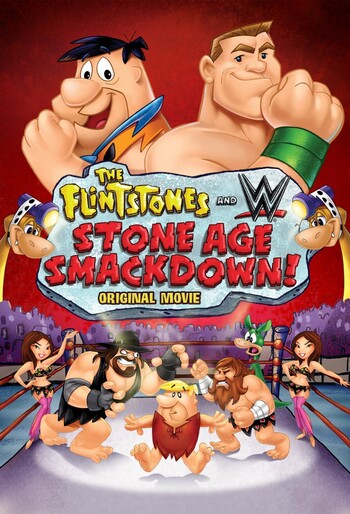 The Flintstones & WWE: Stone Age SmackDown! is a 2015 direct-to-DVD The Flintstones movie. It is a collaboration between Hanna-Barbera and WWE Studios and is the first Flintstones production since 2001's The Flintstones: On the Rocks. It's a bizarre curiosity that followed off WWE's previous crossover with Scooby-Doo and ushered in Warner Bros adding other HB characters into the DTV line.

In Stone Age SmackDown!, Fred Flintstone is looking for a few days off and a paycheck to take his family on vacation. His search for more clams leads him to inadvertently invent Professional Wrestling. Features a number of stone-age parodies of WWE personalities, all of whom voice their own characters.

Interestingly enough, the movie functions as a prequel of sorts to the WWE and professional wrestling itself.