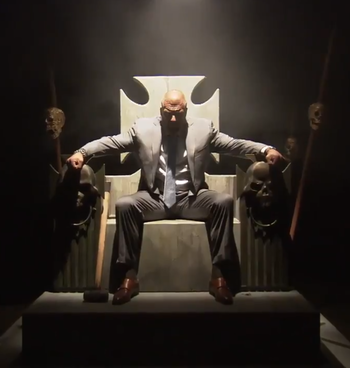 The King of Kings.
"You guys talk about being 'students of the game'? I am the fucking Game, J.R.! There is nobody that eats, sleeps, and breathes this business more than me!"
—Triple H, during a 1999 interview with Jim Ross
Advertisement:

Triple H, or Hunter Hearst Helmsley if you prefer (not Paul Michael Levesque, born July 27, 1969), was one of WWE's longest tenured performers before announcing his in-ring retirement in March 2022. He is a nine-time WWE World Heavyweight Champion

, and has been part of some of the biggest angles and matches in the company's history. Currently, he is the on-screen Chief Operating Officer. In real life, he works in the backstage area of the business, as Executive Vice President of Talent Development and Relations, as well as a "Senior Advisor" to Vince McMahon, and his position as Development EVP means that the developmental show WWE NXT is a major focus of his. He was also given creative control of the then-floundering WWE 205 Live in January 2018.

Received his first induction into the 2019 WWE Hall of Fame, as part of the group induction for D-Generation X. Though, considering his vast contribution to wrestling as a whole, both in and out of the squared circle, he's bound to receive more in the future. Trips wrestled his last matches in June 2019, and announced on March 25, 2022, that he would never wrestle again after viral pneumonia in September 2021 caused damage to his heart.