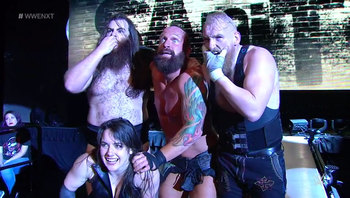 SAnitY was a Professional Wrestling Power Stable in WWE performing in their SmackDown brand consisting of Eric Young, Alexander Wolfe (Axel Tischer), Nikki Cross (Nicola Glencross) and Killian Dain (Damian Mackle). The stable also formerly had Sawyer Fulton (Jacob Southwick), who was Put on a Bus after an injury and later released.

After a series of vignettes

aired on episodes of NXT, it was announced that SAnitY would be making their debut in the Dusty Rhodes Classic, though no members of the stable had been revealed. They debuted in the first round of the DRC, with Alexander Wolfe and Sawyer Fulton (the former a new addition to NXT and the latter a long-time jobber, who had been teaming together for live events) defeating Tye Dillinger and Bobby Roode. After the match, the other two members revealed themselves as Eric Young, the leader of the group, and Nikki Cross, the sole female member and also the most visibly insane.

The team progressed to the second round of the DRC, but were eliminated by TM-61. In November 2016, Sawyer Fulton sustained an injury and would no longer appear as part of the team, which was addressed by Young stomping and kicking Fulton's jacket. Instead, SAnitY began an arc where they targeted Tye Dillinger, wishing to recruit him to replace Fulton. Young made his pitch to Dillinger, who rejected him and attacked Young and Wolfe until Big Damo (another recent NXT recruit) attacked Tye to save Young. Young then offered Fulton's jacket to Damo, who accepted it, and would soon be renamed Killian Dain.

Now back to their original number, SAnitY went after Dillinger, while Nikki Cross went after Asuka for the NXT Women's Championship. The group would repeatedly battle Dillinger, Roderick Strong, No Way Jose, Ruby Riot and Asuka, with Dillinger eventually defeating Young in a steel cage match, and Cross repeatedly losing to Asuka. After Dillinger went to the main roster, SAnitY would battle the Authors of Pain repeatedly for the NXT Tag Team Championships, eventually winning at TakeOver: Brooklyn 3.

In 2018, the stable was added to the SmackDown Live roster as part of that year's post-WrestleMania 34 Superstar Shakeup. However, after a feud with The New Day for the SmackDown Tag Team Championship, they went Out of Focus, not appearing again until Survivor Series 2018, as part of Team SmackDown, with whom they scored the only victory of the night for the brand.

In 2019, Sawyer Fulton debuted at Impact Wrestling as "Mad Man" Fulton, a henchman for Sami Callihan in oVe. In the WWE, meanwhile, Eric Young was drafted to Raw during the Superstar Shake-up. This, coupled with Alexander Wolfe teasing leaving the company, disbanded the stable for good. Wolfe was later sent to NXT UK, Dain to the main NXT, and Nikki Cross, like Young, was assigned to Raw, where both were re-written as essentially new characters.