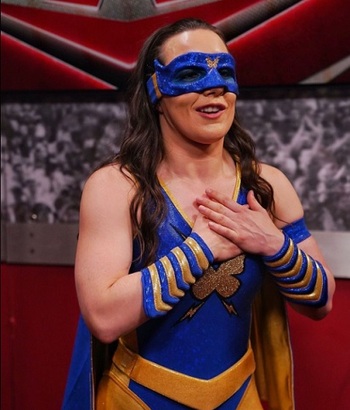 The Scottish Superhero
Nicola Glencross (born 21 April 1989) is a Scottish professional wrestler currently signed to WWE under the ring name Nikki Cross, performing on the Raw brand. Cross previously wrestled on the independent circuit under the ring name Nikki Storm, most notably for Insane Championship Wrestling, Pro-Wrestling: EVE, Scottish Wrestling Entertainment, and SHIMMER Women Athletes. At the 2021 Money in the Bank, Nikki won the women's ladder match only to cash in on Charlotte 24 hours later to become Raw Women's Champion.
Advertisement:

Among her in-ring achievements, she is a 3-time WWE Women's Tag Team Champion

(holding it twice with Alexa Bliss and once with Rhea Ripley), and 11-time/the final WWE 24/7 Champion