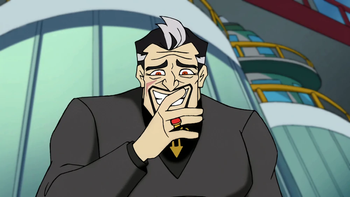 Cronus laughing like a baby. Well, you are what you eat.
"I HAVE CHORTLES!"
— Fawful, Mario & Luigi: Bowser's Inside Story
Advertisement:

Not all villains manage to develop an Evil Laugh. Some, for reasons known only to themselves, prefer to giggle. This can become highly disturbing, making the villain more evil or creepier than if they'd just done a straight-out "Muhahaha!" It's especially creepy when the villain is male, but a giggle from that otherwise dark and grim lady or Cute and Psycho Enfant Terrible is also a very bad sign, since it's generally amusement at the prospect of hurting you. Badly. And Your Little Dog, Too!.

Oddly enough, it can work out for those bad guys who wouldn't be able to carry off a full-throated, maniacal laugh. Or even for those who can, as it provides some contrast between appearance and laugh. One suspects that these villains know exactly how unsettling it is... and derive much pleasure from creeping people out. See also Laughing Mad, The Hyena, and Creepy High-Pitched Voice.