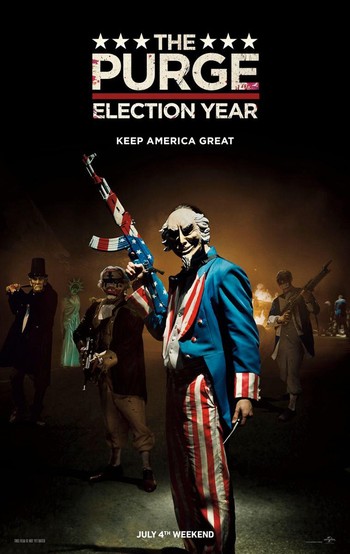 Uncle Sam won't take "no" for an answer this time.
"We will now purge. We will torture you and violate your flesh. Remove your skin and share in your blood. This is the American way."
— Uncle Sam
Advertisement:

The Purge: Election Year is the third film in The Purge (Franchise). Set in 2040, seventeen years after the previous film, Leo Barnes (Frank Grillo) is now head of security for U.S. Senator Charlene Roan (Elizabeth Mitchell), who is running for President with a pledge to eliminate the Purge. The New Founding Fathers want to prevent this and plan to have her assassinated on the Purge night before the election.