Western Animation / Home on the Range 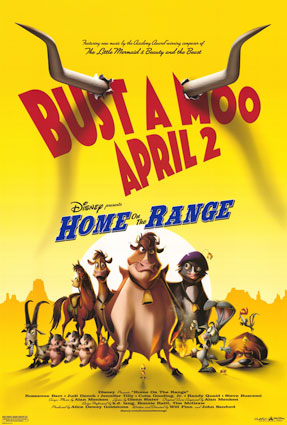 Home on the Range is the 45th entry in the Disney Animated Canon, released on April 2, 2004.
Advertisement:

of the Disney Animated Canon released until 2009's The Princess and the Frog, and third-to-last after that and Winnie the Pooh (2011).

In Ye Olde Wild West, three cows named Maggie, Mrs. Calloway, and Grace live on a small, cozy farm named Patch of Heaven with other animals. When the farm is threatened with foreclosure, our heroines must act to save their home. They plan to achieve this by capturing a big-name cattle rustler named Alameda Slim for his bounty, which is the exact amount they need.

Home on the Range provides examples of:

Will the Sun Ever Shine Again?

Will the Sun Ever Shine Again?