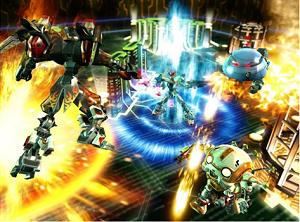 Small, powerful robots have become the number one tool of criminals around this world.
Advertisement:

Custom Robo is an action/third-person shooter/RPG/mecha video games series created by Noise and published by Nintendo. You're in a 20 Minutes into the Future game, with the biggest difference between us and them is that they have super advanced robots that fight each other. Sounds cool? Taking the Humongous Mecha premise and kicking it squarely in the chin, these robots are between eight and ten inches in height. They fight in Holosseums, which are areas designed specifically for this type of combat. They're controlled via "diving" into the robo, where the operator psychically becomes one with their robo. With about 200 different parts, including around 30 different robos, 5 customizable areas (Robo, gun, bomb, pod, legs), and a lot of options for each area, the series intends to live up to the word custom.

The best-known game to North American players is the GameCube release, since the earlier three didn't make it out of Japan. The plot of the most popular game involves a talkative protagonist, a smart-aleck womanizer, and a girl who can see the last memories of a robo commander. Everyone uses robos, including the police, criminals, and you. Notable in that they actually explain why the hell nobody ever carries a gun (Robos are actually quite effective weapons even with safeties on), why Custom Robos are so popular, why you never get to pick which stage you fight on (A person can or can not "make" a stage as a genetic ability, the hero is among the ones that can't), and why you never seem to get paid (your boss is an extreme penny pincher, and everything you get goes to living expenses).

In May 2020, Kenkou Kouji, the original creator of the series released Spiritual Successor, Synaptic Drive.