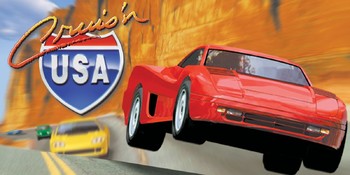 Cruis'n is a series of arcade Racing Games developed by Eugene Jarvis for Midway Games and published by Nintendo. The premise is about as simple and arcade-y as it comes — you drive a car across a voyage along a set of tracks that are confined to a specific theme, depending on which game you are playing. Your goal is to come in first on each course and attempt to make it to the very end, while also dodging all the oncoming traffic. Fret not, however, if you run into the traffic, as your car will only comically fly through the air before landing back on track unscathed.

The series began in 1994 in arcades with the release of Cruis'n USA. This game is particularly noteworthy in the fact that Nintendo used it as a catalyst to show off the capabilities of the then-upcoming Nintendo Ultra 64 (which later became the Nintendo 64). They claimed it, along with the arcade version of Killer Instinct, was running on the same hardware that would eventually be seen in the home console proper and that the home port would be a launch title that would play identically to the arcade release. This turned out to be untrue, however, as the N64 hardware turned out to be vastly inferior to the proprietary arcade hardware that Midway actually used.

Two sequels followed — Cruis'n World in 1996, and Cruis'n Exotica in 2000. The former has the player traversing famous locations all around the world as opposed to a single country, while the latter takes the player across exotic places such as Las Vegas, Hong Kong, and Mars. A few more titles have been sprinkled about through the years, including a Game Boy Advance spinoff Cruis'n Velocity, a Wii reboot simply titled Cruis'n (which is actually a Dolled-Up Installment of another arcade racer based on The Fast and the Furious), and a 2017 revival called Cruis'n Blast which received a Nintendo Switch port in 2021.