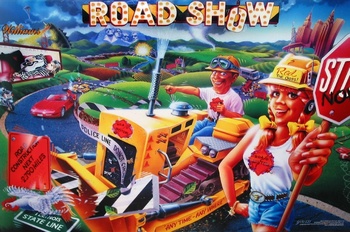 It's a big country... Someone's got to tear it up!
Red: Let's rip some road!
Advertisement:

Red and Ted are a couple of demolition experts on a cross-country trip in their bulldozer, wreaking havoc and having fun along the way. As they go from day to day and city to city, help them blast obstacles, buy souvenirs, and rack up those miles. Watch out for Flying Rocks and angry taxi drivers, keep the radio playing country music, and — most importantly — collect those paychecks. Stay on your toes when the machine starts rumbling, because Red and Ted will be watching you the whole time. And if you can get to the West Coast, you might be able to start Super Payday for big bonuses!

Players have mixed feelings about Road Show. On the one hand, it's a solid pinball game, with lots of depth and humor to keep players entertained. On the other hand, it feels like an evolutionary amalgamation of Pat Lawlor's earlier games, especially Fun House — but following blockbusters like The Addams Family and The Twilight Zone is a challenge for anyone. Regardless, Red & Ted's blue-collar humor resonated with a lot of players, and the table remains highly popular in truck stops and rural establishments.

A digital version was formerly available for FarSight Studios' The Pinball Arcade before their license to all Williams and Bally tables expired on July 1, 2018. However, it has since reappared in Volume 4 of Zen Stduios' Pinball FX3 Williams Collection.

Red: Don't be a stranger!