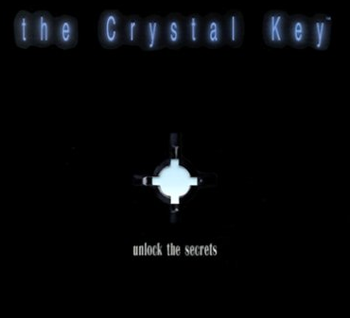 The Crystal Key is a first-person Adventure Game, developed by Earthlight and published by DreamCatcher Interactive in 2000. A loose sequel, The Crystal Key 2, was released 4 years later by The Adventure Company.
Advertisement:

The storyline is set in the future, where a warning from the Arkonian race unintentionally reaches your world. They state that they are on the run from the Evil Overlord, Ozgar, leader of the Balial, having only temporarily defeated him in battle. Two days after the signal's appearance, Ozgar has located your planet and begun wreaking havoc upon it using powerful gravity-altering satellites, prompting your people to send you off in an experimental hypership to locate the source of the Arkonian signal. The player begins the game having crash-landed on an unknown planet and must explore the world, find a crystal key and portal which would help the player defeat Ozgar and bring peace to the galaxy.

The sequel puts you in the shoes of the protagonist's son, Call Lifeson, who, after the events of the first game, lives in peace with his family on their home planet Evany for some time. However, at some point, one by one, the people of Evany start acting strange. They suddenly stop doing their normal tasks, stare at nothing, and sometimes even work like automatons, extracting the planet's resources and loading them into offworld freighters. The Lifesons were spared this fate, until one day, when Call's parents vanished. On that day, an Arkonian portable portal appears along with its user, Athera, who asks Call to come with her. But two Balial soldiers capture her and vanish through another portal, with only her tablet and the Key left behind.

The Crystal Key contains examples of:

The Crystal Key 2 contains examples of: