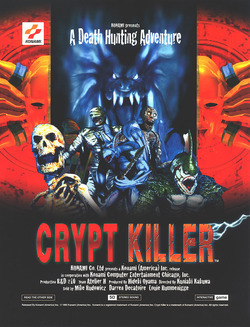 Crypt Killer is a 1995 light gun shooter (Henry Explorers in Japan) from Konami. In it you play as explorers looking for the Eyes of Guidance in hope of finding the ultimate treasure. Just one catch though, a huge wave of monsters stand in your way. It's nothing a shotgun and a couple of bullets can't fix right?

The arcade was notable in that three players could play the game at once, something that was only reserved for mounted gun games. As it was an early game, CK blended both pre-rendered sprites and 3-D background together. While muddled looking the game plays fast and can be quite addicting. At the end of every stage you're allowed to pick from two paths to continue one that would lead to a different stage. These paths decided what ending you got. The game was also ported to the Playstation and Sega Saturn albeit without three player co-op.