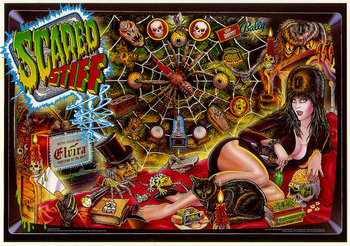 So Fun, It's Scary!
Elvira: "This'll scare your pants off... I hope!"
Advertisement:

A 1996 Pinball game from Williams Electronics (under the Bally label), and the sequel to the 1989 game Elvira and the Party Monsters. For this game, designer Mark Weyna joined Dennis Nordman in the design, and Greg Freres returned for art duties.

This time around you're visiting the sexiest vamp this side of Transylvania in her humble abode, who's settling down for the evening with some spooky television programs. The goal of the game is to activate the Six Tales of Terror, from "Night of the Leapers" to "Terror From the Crate". Get through all the shows, then hit the crate to start the Stiff-O-Meter and see how Scared Stiff you can get. For more variety, scurry though the Boney Beast, peek at The Stiff inside the coffin, and dance with the Boogie Man.

Along with the upgraded sound system, dot-matrix animations, and a more complex playing field, the table was also known for sporting a spinner on the backboard that would activate during the "Stop The Spider" mode. Stopping the spider on symbols yielded points, mode locks, and other bonuses.

With its lighthearted tone and not-too-difficult gameplay, it's still fondly remembered just as much as its predecessor and certainly one of the most popular tables. This is considered one of Williams' classics, and as such it was made available for FarSight Studios' Pinball Arcade up until their license with WMS expired on July 1, 2018.

Scared Stiff has the following tropes: