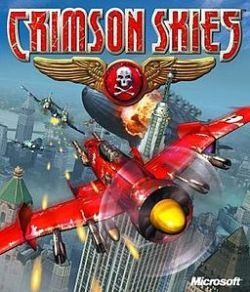 Big guns. Fast planes. Gorgeous dames.
There have been two arcade flight-based Video Games released by FASA Corporation and published by Microsoft Game Studios: Crimson Skies for the PC, an arcade version and Crimson Skies: High Road to Revenge for the Xbox. Rather than trying to take a realistic approach to flight, Crimson Skies instead goes for something akin to Ace Combat, where more emphasis is placed on action and almost-fantastical scenarios over a realistic interpretation of flight. This, along with an emphasis on barnstorming, has lead GameSpot

to comment "Crimson Skies is very much based on a 'movie reality' where if it's fun and looks good, it works."
Advertisement:

In lieu to the Tabletop Games, the series takes place in a Divided States of America universe, which begins after World War I, when a "Regionalist movement" gains popularity in the Union following the outbreak of Spanish influenza pandemic, rallying behind an isolationist platform. Meanwhile, President Woodrow Wilson's authority is undercut when Prohibition failed as a constitutional amendment, leaving the matter to be decided on a state level. The union soon became polarized between "wet" and "dry" states and, checkpoints became a common sight on state borders to stop the flow of alcohol into "dry" states.

The optimism of the The Roaring '20s was upset in 1927 when an outbreak of a deadly strain of influenza in America prompted states to quarantine the outbreak, further dividing the Union. Though not as deadly as the 1918 pandemic, the mass disease had immense political fallout, bolstering regionalist "strong state" views and decreasing voter turnout in the 1928 election. Shortly after the Wall Street Crash of 1929, the nation begins to split. And the rest, is history.

The games' storylines are framed around a Radio Drama esque plot that chronicles the adventures of Nathan Zachary and the Fortune Hunters pirate gang during their rise to fame and fortune. During their escapades, the gang goes head-to-head (or in this case, propeller-to-propeller) with rival pirates and mercenaries, including The Black Swan, Jonathan "Genghis" Kahn, and Ulysses Boothe. Also challenging our heroes are private security firms such as Blake Aviation Security and militia squadrons such as the Hollywood Knights.