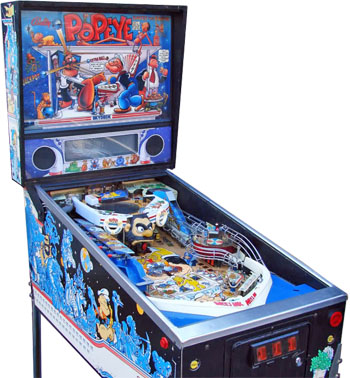 "I yam armed and ready to save the planek!"
"The failure of pinball cannot be blamed on Popeye, but it sure didn't help our business."
—Steve Ritchie, "Why Does Popeye Suck?"

Popeye Saves the Earth is a Physical Pinball Table designed by Barry Oursler and themed and illustrated by Python Anghelo, with additional artwork by John Youssi and Pat McMahon. It was released by Williams Electronics under the "Bally" label in 1994.

As is evident from the title, this is a game based on the long-running Popeye comic strip. Popeye's long-time nemesis Bluto is now a planet-polluting profiteer; his companies' toxic activities have endangered five species of wildlife, while Bluto himself has kidnapped Olive Oyl, and Swee'pea has gotten lost in a maze of corridors. It therefore falls on Popeye to rescue the endangered animals, find Swee'Pea, defeat the Sea Hag, and demolish Bluto's cartel of corrupt companies. Only then can Popeye find his spinach and Rescue Olive in a six-ball multiball frenzy.

Popeye Saves the Earth is infamous among pinball buffs for being one of the most vilified games in modern history, from its Anvilicious Green Aesop and odd use of the Popeye license to the view-blocking toilet-shaped upper playfield and clunky gameplay. Things were no better behind the scenes; the game required customized tooling which raised its price, and Williams' use of minimum orders incited a distributor backlash and threats of lawsuits. While a number of players enjoy it for its family-friendly theme and deep rules, Popeye Saves the Earth is pretty much shrouded in infamy.