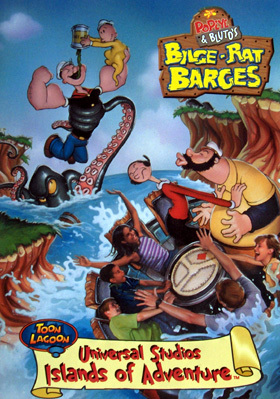 Popeye and Bluto's Bilge-Rat Barges is a river rapids ride located at Universal's Islands of Adventure. Based on the Popeye comic strips and cartoons, the attraction puts riders in the middle of yet another one of Bluto's attempts at stealing Olive Oyl.

The plot of the attraction has guests start off in Sweethaven, where at first they're going to be boarding the luxurious "Popeye's Cruises", only to find themselves forcibly detoured into instead taking a ride on "Bluto's Bilge-Rat Barges", a rafting service that has a terrible reputation. Once onboard, guests are misled by Bluto himself into passing through dangerous rivers, where at the same time Bluto is battling Popeye for Olive Oyl once again. Guests are taken through obstacles such as a giant octopus and Bluto's "Boat Wash" before Popeye is able to obtain a can of spinach and save the day.

Having opened with the park on May 28, 1999, the ride remains quite popular to this day, especially since its ability to get riders soaked comes as a relief to those trying to escape the hot Florida summers.

Adjacent to the ride is a children's playground known as Me Ship, The Olive, which is themed around a fully-explorable boat that contains numerous interactive elements.

Tropes shown in Popeye and Bluto's Bilge-Rat Barges include: