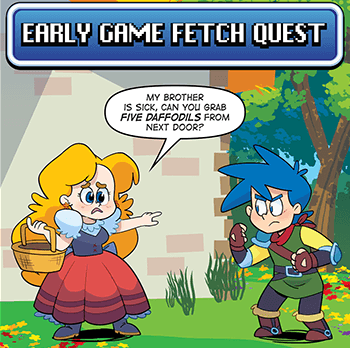 Why she can't just do it herself is anyone's guess.
"Yet more meaningless endeavours?"
— Magus, Chrono Trigger DS
Advertisement:

Need to stretch the story out a bit? Time to send The Hero on an errand!

A Fetch Quest is a subquest of the overreaching plot which must be completed in order to trigger a vital Event Flag. Find a key, save a kid lost in the cave, defeat the monster attacking the town, rescue the trapped workers, resolve an Adventure Town's problem ... each of these is a Plot Coupon. Fetching back the coupons is name of the game.

Games will often use a Broken Bridge to browbeat you into solving a Fetch Quest even if you should intuitively have more important things to do.

This is also known as a FedEx quest, since they often consist of little more than receiving an object from an NPC and taking it to a particular person or place or going to a particular place and bringing back an object. The people, places, and objects themselves are largely inconsequential — you're just their mail carrier.

Sometimes it will provide essential exposition of the plot's backstory which would otherwise be awkward, obvious, or tedious if delivered another way, say by a monologue delivered by an NPC.

Novels, episodic shows and games rely on these as subplots quite frequently.

Extend this ad infinitum, and you get a Chain of Deals. 20 Bear Asses is the variant where you have to collect a given number of objects dropped by enemies, and is much more popular with developers than players. Herding Mission is the variant when you have to corral a group of animals into a pen. If you have to fetch a lot of items but there's no in-universe character telling you to do it, it's probably a Collection Sidequest. If the fetched item is being stolen, you may be dealing with The Caper.

Candace is sent on a long string of trades in an attempt to get a rare Ducky Momo collectible at the Swap Meet.

Candace is sent on a long string of trades in an attempt to get a rare Ducky Momo collectible at the Swap Meet.