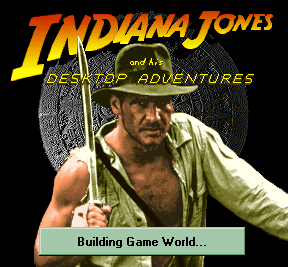 Indiana Jones and his Desktop Adventures is a 1996 Windows and Mac game by LucasArts. Instead of the epic plot and puzzles of the previous Indiana Jones adventure games, it offers quick, "bite-sized" games; each time you start a new game, the world is generated randomly, and the puzzles are picked at random too from a large pool. As a result, every playthrough is different, and even after a couple of playthroughs you're likely to come across something you've never seen before.

It is a simple adventure game with elements of action, set in Central America. The puzzles are typical adventure fare: using items on the environment, giving stuff to people, pushing around blocks and furniture, and pressing switches. There are also enemies, and an assortment of weapons with which to fight them. The game allows adjusting the size of the game world (from tiny to sprawling) and combat difficulty (from simple enough that you can mostly ignore enemies, to brutal.)

Another game in this vein was Yoda Stories, which, as the name implies, focused on the Star Wars universe.

Indiana Jones and his Desktop Tropes: