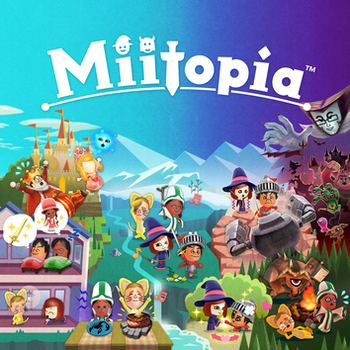 An RPG starring yourself (or not)!

Miitopia is an Eastern RPG with Turn-Based Combat by Nintendo, featuring, as the name suggests, Miis.

Set in medieval times, possibly The Middle Ages, the peaceful land of Miitopia is a land where Miis live...well, peacefully. Then, one day, the Dark Lord starts stealing the Mii's faces to use them to build his evil army to spread chaos and discord all over Miitopia! And that's a bad thing, so heroes played by Miis of the player's choice go on a quest to stop them!

Miitopia allows the player to decide on which roles Miis will fulfill through the game, spanning from every NPC to every playable character. The combat system is turn-based, like a classic RPG, but with a few twists: The characters have a mind of their own. With relationship values, your characters can trip each other up, do devastating combo attacks, and other such things. It also runs on a job system, with the classic jobs of Warrior, Mage, Cleric, and... Cat?

You, the player, are the one in charge of supplying items to the party, which come in the form of regular items and "Sprinkles", which can be used to heal HP and MP with no turn cost. You can also put certain members of the party in the "Safe Spot" which is used for recovering from status effects.

Tropes that apply to Miitopia include...