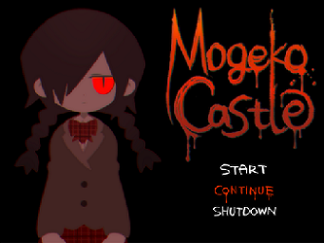 Where there is Mogeko, there is nightmare.
Advertisement:

Yonaka Kurai, an ordinary high school girl, is taking the bus home. Her dearly beloved brother has finally come home, and she's looking forward to seeing him again. During the ride back, she drifts off, and reawakens to find the bus has stopped at an unfamiliar station.

While looking around, she encounters some strange yellow, cat-like creatures: the Mogeko. These odd little creatures appear to be disturbingly obsessed with high school girls, and want to 'play with her'... Soon, Yonaka finds herself trapped inside the titular Mogeko Castle, searching for a way to escape back home.

Along her journey to the seventh floor, she encounters various Mogeko, which help her out. One of them, after she sets him free, joins her on her quest. Can she escape the castle with her sanity intact or will the Mogeko succeed with their perverted plans for her?

This game was translated by vgperson. Those interested in playing can find it over here

. Be forewarned, however, that the game contains some potentially triggering content, mainly violence and implied rape. The author rated the game 'ages 15 and up', but acknowledges this may be too low from a non-Japanese perspective.

Mogeko's other works are The Gray Garden and Wadanohara and the Great Blue Sea.

The game outright TOLD you that you would die, ya big dum-dum!

Example of:
Press X to Die

The game outright TOLD you that you would die, ya big dum-dum!