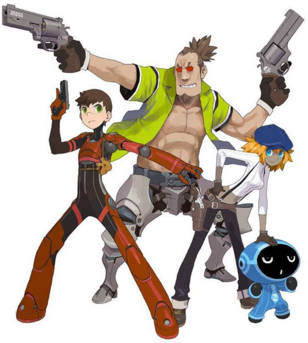 Red Ash: The Indelible Legend is a pseudo-sequel and spinoff of Mighty No. 9, developed by Comcept and created by Keiji Inafune as a spiritual counterpart to the Mega Man Legends series. Like its predecessor, Red Ash was slated to be funded via Kickstarter. Unlike the overwhelmingly positive reaction to Mighty No. 9's crowdfunding campaign, however, Red Ash was met with a mixed - bordering on outright negative - reception for a number of reasons. In July 2015, Chinese company FUZE Entertainment was announced as the publisher and primary funding source for Red Ash, and the funds raised by Kickstarter were stated to be going towards expanding the scope of the game. This led to a backlash, with many Kickstarter backers pulling out, and the project's future was uncertain.

At the end of it all, the Kickstarter failed to meet its original projections after getting only $519,999 out of the $800,000 it had previously asked for. While the aforementioned partnership with FUZE meant the project would supposedly keep going, nothing has been heard since.

In 2017, the project saw its Animated Adaptation finally realized in the form of Red Ash: Gearworld,note Formerly Red Ash: Magicada which premiered as part of the Anime Tamago 2017 shorts lineup. This single episode was since pulled and is now difficult to find.

Red Ash is set in a post-apocalyptic universe and stars alternate versions of Beck and Call, who salvage parts of giant robots for a living.