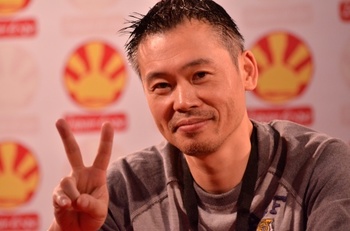 Keiji Inafune (born 8 May 1965) is a video game artist/producer. Often called "the father of Mega Man" or the "Man Behind the Mega", he was a long-time contributor and producer to the Mega Man games and is the creator of the popular Capcom character Zero.

Inafune got his start in the games industry working as an artist and object designer for several Capcom arcade games in the mid 1980's. For the original Mega Man he designed the title character (alongside Mega Man's often overlooked creator Akira Kitamura) as well as the original grunt enemies and bosses. He would get his first taste of producing the Rockman/Mega Man games starting with Mega Man 3, and produced the games full-time from 1996 until 2011. Inafune was the visionary behind the story, setting and artistic direction of Mega Man X and later Mega Man Zero.

He served as a vice president at Capcom and produced several of their games (Such as the original Dead Rising and Lost Planet ) but a nasty fallout with upper management lead him to split from Capcom to form his own company named "Comcept". In particular, he had a long-term rivalry with Capcom's money-driven marketing for the Mega Man series, resulting in a complete disregard to his wants, and culminating in the production of Mega Man X6-X8 (even though he wanted to end the Mega Man X games after X5) and an altered plot that contradicted what Inafune had planned for the Mega Man Zero series. After more madness with the games and the production of Mega Man Legends 3 truncated, Inafune got up and left the company, which caused Ultimate Marvel vs. Capcom 3 to be what it is now, and caused the cancellation of Legends 3.

He launched a Kickstarter campaign for Mighty No. 9, a Spiritual Successor of Mega Man featuring a protagonist who can use Power Copying to transform himself. The Kickstarter was successful, but the game had a lot of Development Hell. He later launched another Kickstarter on the development for Red Ash, another Spiritual Successor, except for Mega Man Legends; unfortunately for Inafune, this campaign failed considerably, due to the delay of Mighty No. 9, the reveal that he was already funded by FUZE, and that a preview of Red Ash was poorly received.

Inafune maintains a working relationship with Inti Creates, a video game company itself comprised of ex-Capcom staff, which aided in the creation of the Mega Man Zero and Mega Man ZX series, as well as Mega Man 9, Mega Man 10, and the aforementioned Mighty No. 9. Their first self-published game, Azure Striker Gunvolt, was developed with Inafune's input and had additional cross-promotion for Mighty No. 9 in the form of Mighty Gunvolt, a free add-on title for those who downloaded Azure Striker Gunvolt by November 28, 2014. It features an imitation of 8-bit graphics (like the Mega Man a mini-game in ZX Advent) and Beck as a playable character alongside Gunvolt and Ekoro (of Gal*Gun, another Inti Creates title).

In mid-2017, Inafune's Comcept was bought out by the developer Level-5, and is now a subsidiary named Level-5 Comcept, which Inafune is now COO of.