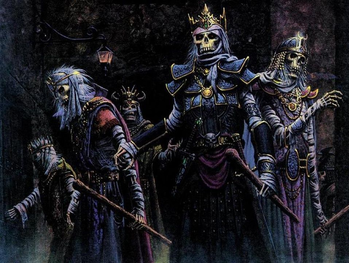 Skeletons in the cabinet.
"Enlightened rule by the dead is preferable to the misguided failures of the living."
— Maester Kinoc, Final Fantasy X
Advertisement:

It's the literal version of Skeleton Government. That is, a government staffed by actual dead or undead: liches, vampires, undead spirits and the like. The main variations are whether whether the rulers are fully dead or undead, whether the subjects are also all or mostly undead, and whether the nation as a whole is good-aligned, evil-aligned, or neutral.

Malevolent examples are frequently used as The Horde (although living subjects might be more sympathetic). Non-malevolent examples are usually Dark Is Not Evil, oftentimes with a dash of Not Evil, Just Misunderstood. If you come across a city or fortress named Necropolis (Greek for "city of the dead") in a fantasy setting, chances are you're dealing with this trope. Stay away from these places.

A Necrocracy usually comes in one of several flavors:

If they have a military structure, the mooks are probably undead too.

A Sorcerous Overlord who is also a Lich would be an example, as is a Magocracy of undead wizards. Societies led by Vampire Monarchs also qualify. See also Immortal Ruler, who needn't be a corpse.

Real Life examples are of the "Rule of the Dead" flavor by necessity, and the rulers are actually dead.