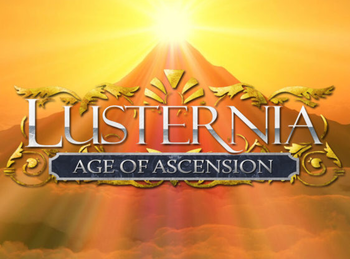 One of several MUDs developed by Iron Realms Entertainment (of Achaea fame), Lusternia was released in 2004 and combines elements of fantasy, sci-fi, planar travel, steampunk, and cosmic horror stories.
Advertisement:

Long ago, there was nothing but a presence called Yudhe. Lonely and bored, he conjured two daughters for company: Magnora and Dynara, who became, respectively, manifestations of Destruction and Creation. For many eons, Dynara would create planets, stars and galaxies for her own amusement; Magnora would follow behind and eat the result. The only thing Dynara could not truly create was life. Though she did manage to beget intelligent beings, they were soulless and hideous, existing only to eat. Magnora either devoured these monsters, or kept them as playthings, feeding them scraps and making them ever-more monstrous. All this changed when Yudhe begat a son. This nameless, formless son taught Dynara the secret of true creation — splitting off pieces of themselves, the two siblings could create lesser forms of life.

Dynara loved these intelligent, many-varied creatures very much, and refused to let Magnora devour them, disrupting the natural order and enraging her sister. Consumed by anger, Magnora ate the Nameless Son of Yudhe, and he vanished from existence. Both Dynara and Magnora were overcome with sorrow, for they were both part of Yudhe, and he was much affected by the loss of his son. Together, they struck out to find him, departing the universe in their quest, never to return. Only their children were left behind. While the older, Soulless Gods sought only to consume, pervert and destroy, the younger gods (dubbed 'Elders' by the half-formed Gods who, without Dynara, would never grow to full potential) sought to populate the world with plants, animals, nature spirits and life. The Elder Gods were drawn to the First World, Lusternia, to make it whole with their efforts: the Soulless Gods, further out in the cold Void, were drawn to the First World to eat their siblings and destroy the universe.

And so a great war fought between the Soulless Gods and the Elder Gods decimated the land. Many Soulless and Elders died in the skirmish, until only the five mightiest Soulless Gods remained: Illith the Leviathan, Crazen the Greedy, Great Muud, Zenos the Silent Death, and Kethuru the Almighty. The remaining Elder Gods either fled into the void or "sharded" — the Gods that 'sharded' died, but also created the mortal races, which retained qualities of their 'parent' God. The mortals fought, and ultimately imprisoned the remaining Soulless after many years of conflict. They built a mighty empire in the intervening years, and all was prosperous...

... but the civilization grew stagnant and proud. Their quest for ever greater power inadvertently released the mightiest of the Soulless, Kethuru, from his prison, and his tainted effluence transformed many mortals into undead monstrosities before he could be re-sealed. The Empire fell apart, numerous new animosities (and old ones long forgotten) were sparked, and war began. Even the return of the Elder Gods didn't change things: the flawed deities, remembering their old animosities, became patrons to favoured mortals and began to fight amongst themselves. There has been conflict ever since between the chief organizations of Lusternia:

And that's not even the worst of it. Remember the five sealed Soulless? They cannot be destroyed even with the return of the Elder Gods; they've devoured too much of reality, and are now an integral part of the universe. Kill them and you kill everyone and everything else. That wouldn't be so bad if their prisons were foolproof, but, well, they have a habit of breaking free. Once a generation, at least one of the horrors will slip through the cracks and the boldest adventurer of the time must ascend to divinity to reseal them once more.

Notable for a rich, intricate history and dynamic player-run politics, it can be played via browser at Lusternia.com