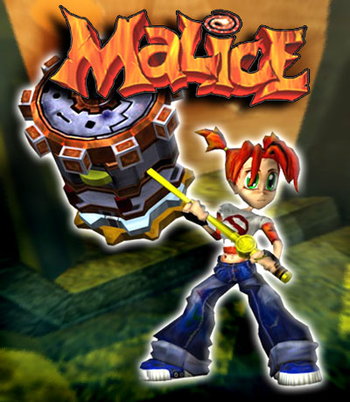 So, a goddess gets her head bitten off by the evil Dog God and is subsequently kicked out of the afterlife by Death, since a god can't die and she therefore has no business being there. So it's back to the land of the living for our heroine, who must enlist the aid of a giant sentient clock to settle the score with the Dog God. This, of course, involves collecting eight "logic keys" that are scattered around the game world.

Despite originally being intended as a PlayStation title, it was retooled to be an Xbox launch game, and after a lengthy stay in Development Hell, it was finally released in 2004 on Xbox and PlayStation 2.

Not to be confused with the book or the film of the same name.

Malice contains examples of the following: