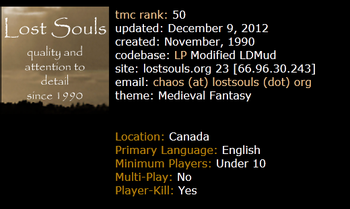 Basically everything you need to know at the start.
Lost Souls MUD

is a Multi-User Dungeon, or text-based online role-playing game, dating to 1990. It has strong influences from The Chronicles of Amber, The Lord of the Rings and Cthulhu Mythos.