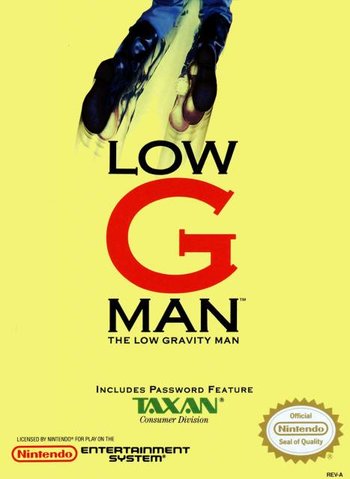 Low G Man is an Action Platform Game published by Taxan and developed by KID Corp. for the Nintendo Entertainment System in 1990.

In the year 2284, humans have perfected outer space travel and anti-gravity technology, and are looking to spread their influence throughout the galaxy by colonizing other planets and building exploration robots on them. However, one of the robot-producing planets is taken over by an alien race, who reprograms the robots to aid them in their bid to purge the galaxy of all organic life.

To fight back against the alien menace, Earth sends a crew of super-powered warriors called the Low-G Men, who are equipped with low-gravity backpacks that give them amazing maneuverability, even under high gravity conditions. One such Low-G Man (you, the player) is sent on a solo mission to break through the aliens' defenses and defeat their leader.