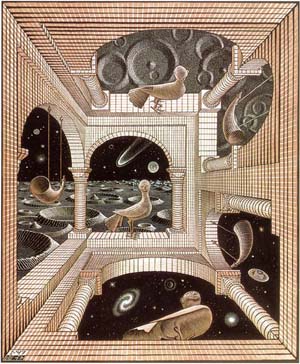 Which way do I go, Jh'rj, which way do I go?
Black Mage: You aren't going to draw out ancient and malevolent forces from the Underverse with an upside-down room.
Fighter: So how do you do it?
Black Mage: Not that I know everything about that... but you start with parallel lines that intersect and you go from there.
— 8-Bit Theater, #1004

A staple of Cosmic Horror Story and of Mind Screw artworks. Elder Gods, Old Ones, the Reality Warper, The Omnipotent and other cosmic entities tend to bend the laws of physics to suit them. Why make a triangle where the angles add up to 180 degrees, when you can make one where they add up to 200 degrees in a flat space and get some extra room? Even the very body of a particularly squamous thing may exhibit this, though more often it shows up in architecture as physically-impossible buildings — occasionally sentient themselves.

Alien Geometries are often depicted as being dangerous to the sanity of normal humans; where you have to read the Tome of Eldritch Lore for it to drive you crazy, just looking at this stuff can have an unpleasant effect on your mental stability. Or at least really give you a headache.

More innocuous forms may appear normal. Then you realize that it is physically impossible for something this size to fit in that, or you travel a short distance and find yourself kilometers away, or you turn left and end up to your right. Doubly fun if found in the Mobile Maze.

gets used often to describe shapes and structures that don't make logical sense, though it's not always correct. It was used by H. P. Lovecraft to describe the impossible angles and shapes found in alien structures in his works, though not all impossible geometries would be counted as "non-Euclidean"; that term refers to certain geometric forms that don't behave like a "flat" surface but still form a consistent and logical geometry. (It's possible to construct a 2-dimensional geometry on a curved Euclidean surface that is non-Euclidean, but a three-dimensional non-Euclidean geometry requires spacial distortion, such as might be induced by a powerful gravitational field.)

Eldritch Locations are a good place to find this. Sometimes it is a single wall or building that is just a little... off. See also Hyperspace Is a Scary Place, an entire alternate universe that just does not make sense. A Minus World in video games might be considered one due to unintentional programming bugs. This might also manifest as an Unnaturally Looping Location.

Compare with Bizarrchitecture, Sinister Geometry, and Scooby-Dooby Doors (when done for comedy).